When a student athlete leaves for college, he takes with him a piece of his family, his high school and his community. St. Mary’s Ryken junior Will Johnson will take those things with him to Blacksburg, Va., after announcing has verbal commitment to Virginia Tech last month.

The 3-star safety has earned over 20 offers and had impressive options to choose from, including the University of Maryland, Boston College, Pittsburgh and Northwestern, but the more he thought about it, the more he knew he was meant to be a Hokie.

“It just felt like home. It’s only five hours away from my house, so my family can come and see me play,” Johnson said. “They play big time football up there, and their schedule is insane next year; they’re on the rise. I really like the coaching staff and the area, and it’s just a great fit for me.” 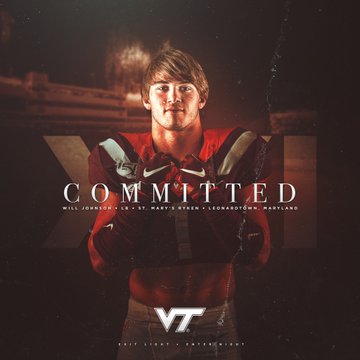 Johnson is anchored by his relationship with his family, and he’s set to be the first to attend college; an accomplishment that stretches beyond the boundaries of any football field.

“When I told my mom and dad it was Tech they basically bust out in tears. It was an awesome moment,” Johnson said. “Without them and their motivation, I probably wouldn’t be in this position. I’ve made it to this point because of how hard we work as a family and the dedication we have to each other.”

A three-year starter, Johnson is a cornerstone of the Ryken football program. He was a member of the inaugural NBC Sports Washington All-DMV team and earned All-WCAC honors, but beyond his accomplishments on the field, he has served as an example for his teammates off it.

“Will has set the tone for our program since freshman year,” Ryken head coach Aaron Brady said. “From day one of camp as a freshman, no one has ever questioned his dedication to his teammates, the program or the coaches. In this day and age, he is truly refreshing.”

Under the tutelage of Brady, Johnson and his rising senior class have turned around the Ryken football program. The year before they all arrived, the Knights finished with a record of 1-9. In the last three years, they have won at least nine games each season, including back-to-back WCAC metro division championships.

“His group of rising seniors have had a great run here with 28 wins in three seasons,” Brady said. “But more importantly, they have raised the team GPA to its highest mark ever, and they have changed the culture of the school.”

When Johnson arrives at Tech, he is expected to compete for playing time at outside linebacker as a true freshman — a daunting task to say the least — but with his dedication and propensity for hard work, there is reason to believe he’ll be up for it.

“Will is a leader in the classroom, in the weight room, in the community and on the field,” Brady said. “He is a great example of a hungry and humble student athlete. He attacks each day. We have to tell him to take a break sometimes — which is a great problem to have.”