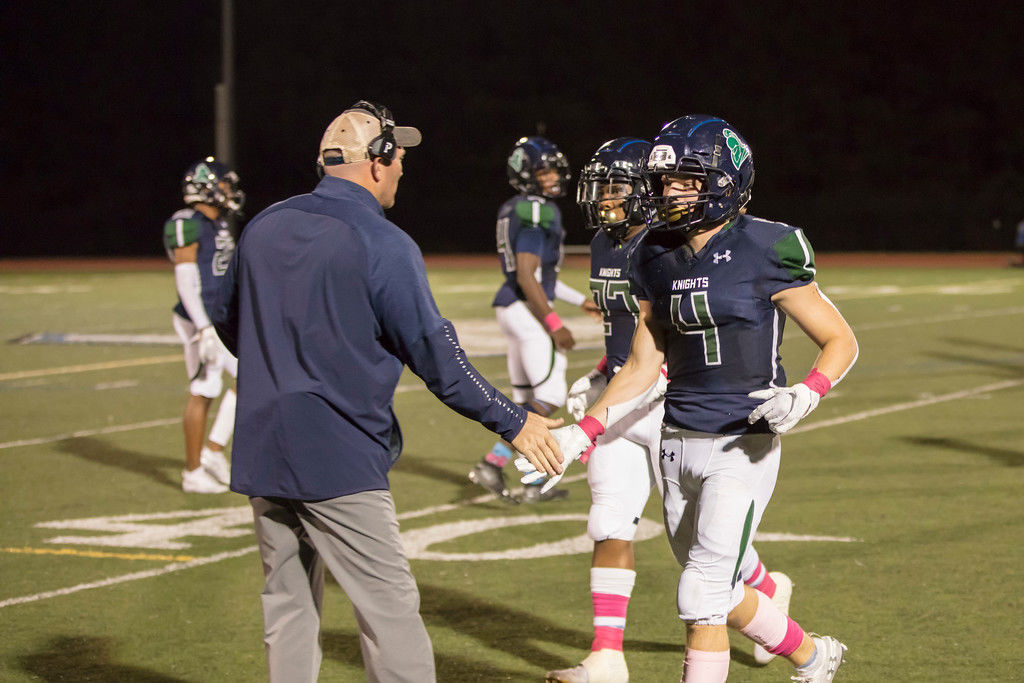 After capturing the Washington Catholic Athletic Conference Metro championship a year ago, the St. Mary’s Ryken Knights, under third-year head coach Aaron Brady, made a strong statement in their conference opener on Friday night at home against Bishop O’Connell.

“We came out and did what we had to do,” Knights senior Colyn Webster said. “It feels great. This was our homecoming game, and there was a great crowd. Our plan coming in was to get a shutout and that is what we did.”

St. Mary’s Ryken was able to earn a 49-0 win and begin WCAC play by cruising to the victory in front of a full crowd packed into the bleachers.

“It was great, especially with homecoming and so much going on with all of the distractions to just come out and get the win,” Brady said. “I think after the Good Counsel game last week, losing [17-14] to a nationally ranked team, but being right there, that focus and energy is what we brought tonight.”

After holding O’Connell to a three-and-out to begin the game, St. Mary’s Ryken (4-3, 1-0 WCAC) scored on its second play from scrimmage on a 35-yard touchdown strike from junior quarterback Trev Nored to junior wide receiver Dez Williams less than two minutes into the game.

Williams was able to find the end zone a second time before the opening quarter concluded on a 33-yard touchdown pass from Nored to put St. Mary’s Ryken in front 14-0 with 5 minutes 38 seconds left in the first.

“We just have to keep it rolling,” Brady said. “We are excited about the way we are playing. We are playing the best football we have played in the three years I’ve been here.”

Nored connected with junior Will Johnson on an 8-yard touchdown pass and sophomore Jordan Scarbrough on a 26-yard touchdown in the air before the opening quarter finished up with St. Mary’s Ryken leading 28-0.

In the second quarter, Nored scrambled into the end zone for a 15-yard rushing score with 9:55 left until halftime.

O’Connell (1-5, 0-1) struggled to sustain drives on offense and was held without a first down in the first half.

St. Mary’s Ryken added to its lead on a 24-yard rushing touchdown from junior Jamaree Bowman and a 19-yard rush from Nored to lead 49-0 at the half.

“The biggest thing for us is to get better at the basics. Football is about blocking and tackling, and we are a really young team,” Brady said. “We have about nine seniors on the whole team, so we play a lot of young guys. For them, it is about getting better at the basic techniques all the time. We spend a lot of time on the basics. We try to practice really fast so that when we are actually in a real game, it slows down.”

Nored threw for 200 yards on 11 completed passes and accounted for six of the Knights’ seven touchdowns. Bowman led St. Mary’s Ryken on the ground with 100 yards on seven carries and senior Aiden Weber rushed three times for 51 yards.

On the receiving end, Williams recorded four catches for 113 yards and two touchdowns, while Johnson and Scarbrough each caught three balls and scored once.

St. Mary’s Ryken is scheduled to host Bishop Ireton of Virginia in another WCAC contest at 7 p.m. Friday.

“We are going to come back even stronger,” Webster said.