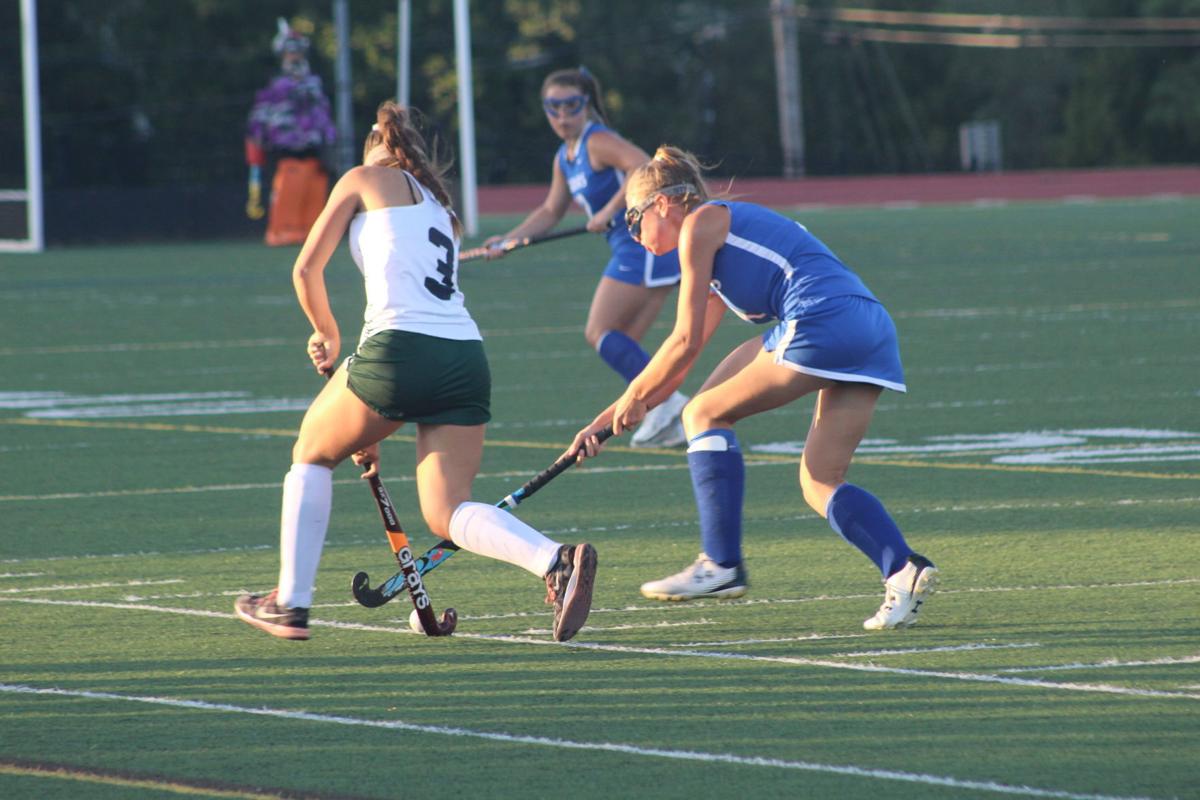 Article and Photos by Ted Black of The Enterprise

Although their extremely close proximity to one another might bolster the intensity of a potential rivalry, perhaps the atmosphere of the nearby St. Mary’s County Fair offered more than a hint of civility among the squads as the St. Mary’s Ryken field hockey team edged visiting Leonardtown on Thursday, 1-0.

St. Mary’s Ryken controlled possessions through much of the first half and Knights attackers kept Leonardtown goalie Hailey Stack busy. Stack played exemplary in the box, kicking away numerous quality shots from Gina Jaffurs, Molly Guy, Taytum Shipman and Abigail Simmons. Eventually, Leonardtown gave way under the steady pressure and Simmons tallied the lone goal of the evening midway through the first half.

“It’s always exciting to score,” Simmons said. “We had some really good possessions in the first half. Taytum took some really good shots. Jamie [Kost] is great on [penalty] corners. We knew it was going to be really close. They’re good competition and they’re our closest rival.”

St. Mary’s Ryken (3-2, 2-1 WCAC) defeated its first two Washington Catholic Athletic Conference opponents that it had faced, Bishop O’Connell of Virginia and Elizabeth Seton of Prince George’s County, prior to a 4-0 loss to St. John’s of Washington, D.C. on Monday, and Simmons is confident the Knights can make a serious push for the WCAC title.

“We know that we can do it,” Simmons said of claiming the WCAC crown. “We have been working really hard in practice and we’ve been playing well. We know we can definitely take it all the way [to the WCAC title].”

St. Mary’s Ryken head coach Tara Everly was pleased with the way the Knights performed in Thursday’s contest and welcomed the challenge that her nearby, nonconference rivals from Leonardtown presented. The annual meeting between the squads has produced a genuine friendly rivalry, one that is beneficial to both teams on various levels.

“We always have a tough game with Leonardtown,” Everly said. “They’re a very talented group of girls. We’re so far from everyone else, it’s great to have such good competition so close. I thought the girls played really well today. We’ll see how far they can go when they get into the WCAC portion of the schedule.”

While St. Mary’s Ryken kept Leonardtown keepers Stack and Sara VanRyswick, who guarded the goal box in the second half, busy throughout the outing, the Raiders did forge several good drives and shots from Anna DiRenzo, Blake Bahr, Kennedy Morgan and Jordan Amspacher in a losing cause.

Bahr took most of the penalty corners on set plays for the Raiders.

“I thought our girls played very well,” said Leonardtown head coach Amberly Kelley, a former field hockey player and referee. “We’re not used to playing on such a fast field. The ball really moves over this field. We’re used to playing on grass fields where it can be clumpy. But I saw a lot of good things from our girls moving forward.”