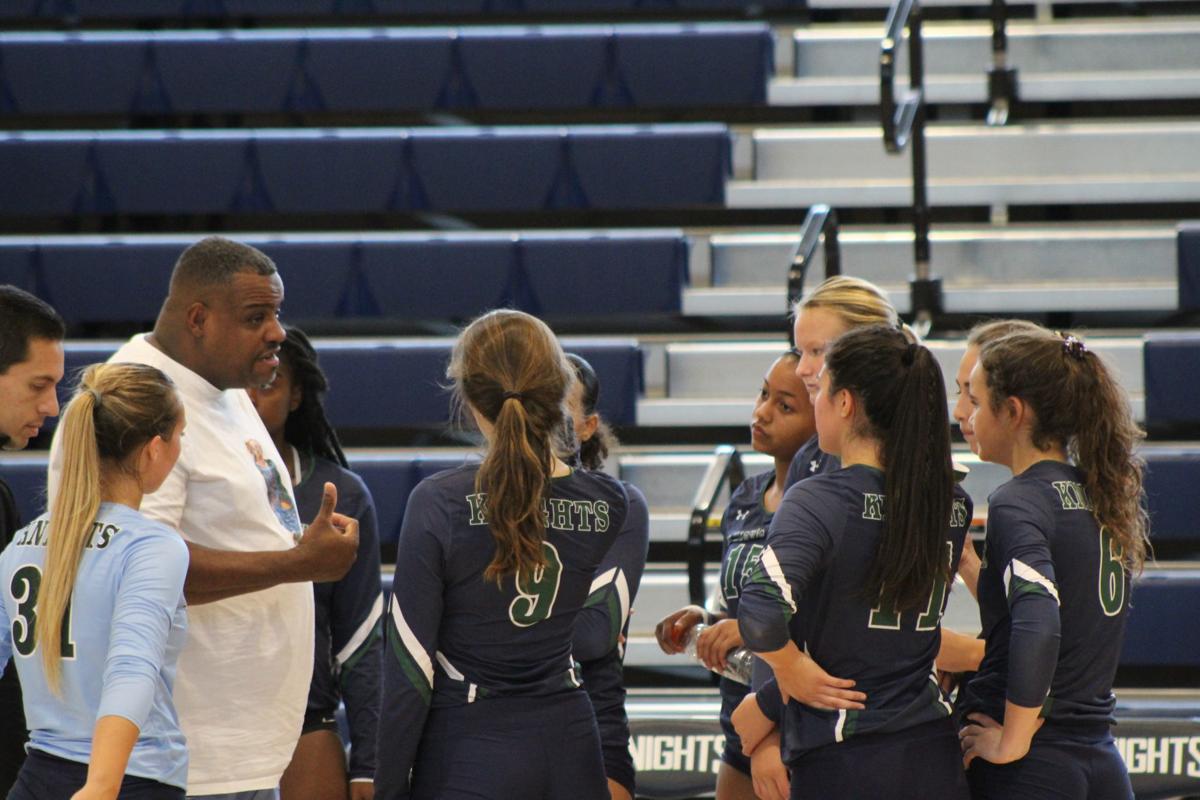 Taking on the North Point Eagles out of the Southern Maryland Athletic Conference, St. Mary’s Ryken was looking to extend its winning streak to three in a row on Saturday afternoon.

“We had some big wins on Thursday and Friday, and we were just trying to flow with the momentum,” Knights head coach Delwin Harris said.

St. Mary’s Ryken was able to keep up its winning momentum and earn a straight-sets win with scores of 25-16, 25-19, 25-11 over the Eagles at the newly opened Donnie Williams Center gymnasium.

“We played solid all the way around today,” Harris said. “There was some tough competition against a good team, and we just figured out how to win today. I am proud of my team.”

In the opening set, North Point’s Allegria Wahle pulled the visitors to within seven points trailing 20-13, but the Knights (5-5 overall) closed out the first set by winning five of the last eight points.

Early on in the second set, the score remained close as North Point (3-4) battled to not fall behind two sets in the match.

The score was tied at 4, 5 and 9 before North Point’s Janiya Brand served an ace to put the Eagles in front 10-9.

Brand’s ace sparked three consecutive points for North Point after a kill from Asya Anderson and another ace courtesy of Brand.

Harris called a timeout as the visitors were threatening to pull away midway through the second.

Out of the timeout, the Knights were able to turn things around and string together a run of points to regain the lead at 17-14 before it was Wallace’s turn to utilize a timeout.

“We didn’t show our skills as a team today,” Wallace said. “The girls are just in their own heads right now, and I am working to help them get out of it.”

The Eagles were unable to string together a run of points like the Knights were able to out of their timeout, and faced an uphill battle entering the third set after dropping the second by six points.

North Point won the first point of the third set, but quickly fell behind 17-6 on an ace from St. Mary’s Ryken junior Lila Flores.

The Knights pulled ahead 21-9 as Wallace called a timeout, but back-to-back aces from St. Mary’s Ryken junior Dajah Farmer closed out the third consecutive victory for the hosts.

“We will come back stronger next week and shake this loss off,” Wallace said.

North Point is slated to have its next match at Chopticon at 5:30 p.m. Thursday and St. Mary’s Ryken is back in WCAC action at Paul VI (Va.) at 6 p.m. Thursday.