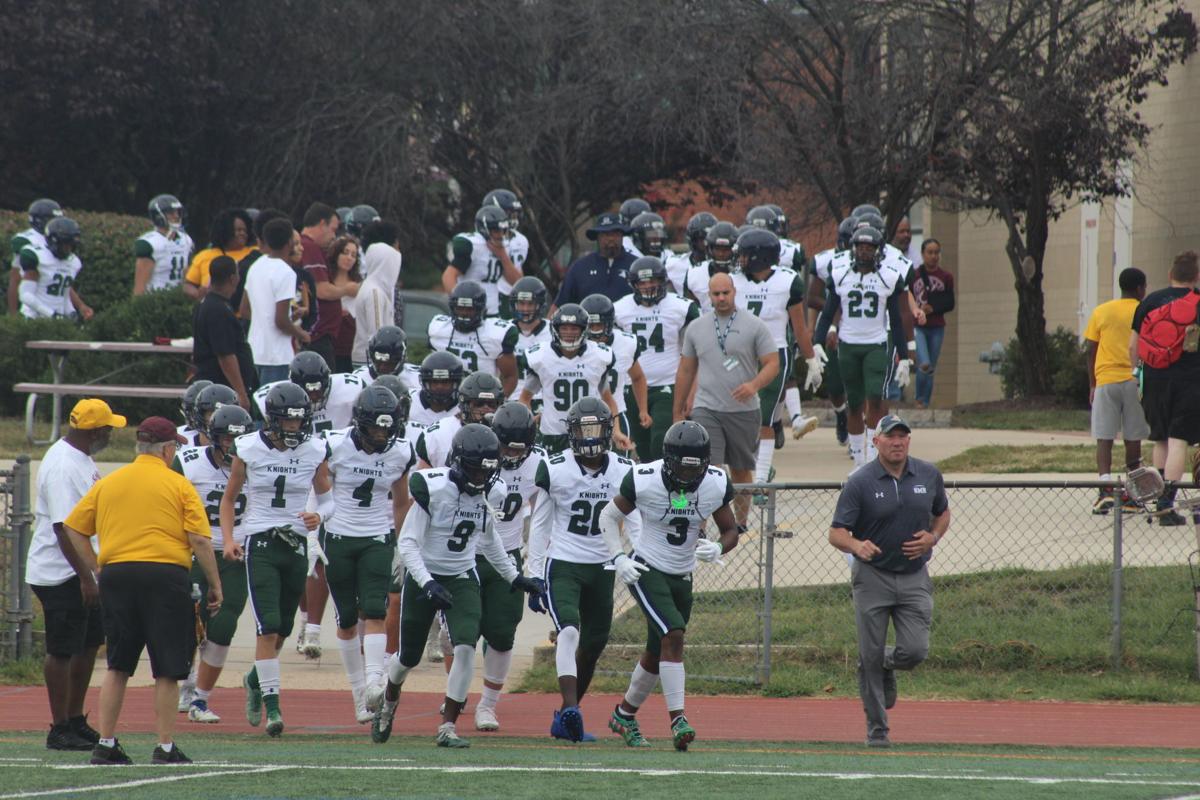 Article and Photos by Ted Black of The Enterprise

Midway through the third quarter on Saturday afternoon, with his team nursing a 7-6 advantage and on the verge of being overtaken as Bishop McNamara lined up for a 28-yard field goal, St. Mary’s Ryken head coach Aaron Brady yelled out to his special teams players to “scoop and score” just before the snap.

Mitchell went around the right side cleanly, blocked the field goal attempt by McNamara kicker Jacob Pavkov and raced 75 yards for a touchdown. The Knights added another score in the fourth quarter and held on for a 21-12 victory over the Mustangs in a Washington Catholic Athletic Conference inter-division clash.

“I got through and made the block, but I don’t think I was supposed to pick up the ball and score,” Mitchell said. “I know coach wanted me to get through and block the kick. When it bounced right in front of me, I just picked it up and took it down the sidelines.”

St. Mary’s Ryken (1-2 overall) had several genuine chances to put more points on the board. On its last drive of the first quarter, the Knights marched deep into McNamara territory and enjoyed a second and goal situation at the Mustangs’ 1-yard line to start the second quarter. The Knights, however, failed to capitalize on that opportunity.

On second down, St. Mary’s Ryken running back Jamaree Bowman was stuffed at the line of scrimmage, then he fumbled on third down while attempting to dive over the pile and the Mustangs recovered the ball in the end zone for a touchback. Following a short McNamara punt, the Knights began their next drive at the Mustangs’ 34 and this time the visitors cashed in.

Following a short drive that was briefly stalled by a pair of offensive penalties, St. Mary’s Ryken finally broke the scoreless deadlock when Londyn Thomas plowed forward from one yard out and Joe Newton added the extra point to give the Knights a 7-0 lead with 8 minutes 22 seconds left in the first half.

Following another short McNamara punt, St. Mary’s Ryken crossed midfield on the first play from scrimmage when wide receiver Will Johnson took the direct snap from center from the Wildcat formation and rushed off left tackle for 26 yards. But on the Knights’ very next play, quarterback Trevor Nored was sacked and fumbled and McNamara recovered at its own 35.

“I was happy with the way we ran the ball today, but we still have a lot of things to clean up,” Brady said. “We should have been able to put some more points on the board. Anytime you can win a WCAC game on the road against a good team you have to be happy with that. But we still have plenty of work to do.”

Bolstered by the turnover, McNamara responded with its best drive of the game. Mustangs quarterback Kenneth Prince Jr., completed three passes on the drive and rushed three times for 24 yards and he found the end zone from one yard out to trim the Knights lead to 7-6 as Pavkov pushed his extra point attempt wide left with 1:29 remaining in the half.

On its second possession of the second half, McNamara again marched deep into St. Mary’s Ryken territory courtesy of a 42-yard pass from Prince to Kenneth Womack. But the drive stalled and the Mustangs settled for a 28-yard field goal try that Mitchell blocked then returned 75 yards for a touchdown that gave the Knights a 14-6 advantage.

St. Mary’s Ryken started the fourth quarter in McNamara territory and reached the Mustangs’ red zone before Thomas fumbled attempting to bounce off left tackle, but Kaylen Perez intercepted a Prince pass at the Mustangs’ 22.

Three plays later, Nored connected with Johnson on a 36-yard strike down the right sideline to extend the Knights’ lead to 21-6 with 8:21 remaining.

“On that Wildcat play, we’ve been running that in practice and I knew it would be part of the game plan today,” Johnson said. “I just took the snap and looked for a good block. On the touchdown, I just looked to get down the sideline and Trevor put the ball right over my shoulder.”

McNamara immediately responded by marching 64 yards in only five plays as Prince connected with Womack on an 18-yard strike to narrow the gap to 21-12 with 6:53 remaining. But the Knights virtually sealed it by employing Bowman on numerous runs and the game ended somewhat belatedly after a handful of unsportsmanlike penalties were issued to the Mustangs, four of them on members of the coaching staff.